From back pain to depression, alternative medicine has over the years become a popular way of healing.. Aromatherapy, acupuncture, crystal therapy and many more are common replacements to the traditional doctor therapy. Medical cannabis, nowadays is being used as another method of alternate healing.

Though recreational use of the drug is still illegal in the U.S., the popularity of the drug for medicinal purposes is on the rise. With more states legalizing medical cannabis each year – currently 17 states and the District of Columbia have passed legislation governing the drug’s use for medical purposes – the substance is increasingly being used to help treat Nausea and Appetite. 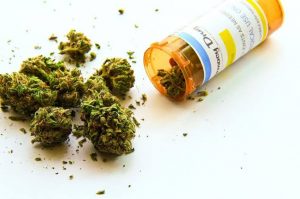 CB1 receptors and CB2 receptors are two types of receptors that are found in human body that allows us to take in the effects of medical cannabis.

CB1 receptors are primarily found in the brain and spinal cord and CB2 receptors are found on the immune tissues. When coming into contact with cannabis, our body produces molecules (called endocannabinoids) that interact with these CB1 and CB2 receptors which produces the euphoric state that helps to dull our senses to various symptoms.

One common use of medical cannabis is to ease the symptoms of nausea. In trials conducted by National Cancer Institute, two FDA-approved cannabis-based drugs, dronabinol and nabilone, helped to reduce chemotherapy-related nausea and vomiting in cancer patients. When taken orally, the drugs “worked as well as or better than some of the weaker FDA-approved drugs to relieve nausea and vomiting” [source: National Cancer Institute].

Another common use for medicinal cannabis is stimulating appetite. In a clinical trial conducted by the National Cancer Institute, “patients with HIV/AIDS and weight loss found that those who took dronabinol (delta-9-THC) had increased appetite and stopped losing weight compared with patients who took a placebo.” Though, the trial also found that the dronabinol was less effective at increasing the appetite of patients in the advanced stages of cancer than standard treatment methods.

Studies of healthy people performed by the institute indicate that the inhalation of cannabis can lead to an increased consumption of calories, especially in sweet and fatty foods. In addition, many animal studies have proven that inhaling cannabinoids increases food consumption [source: National Cancer Institute].